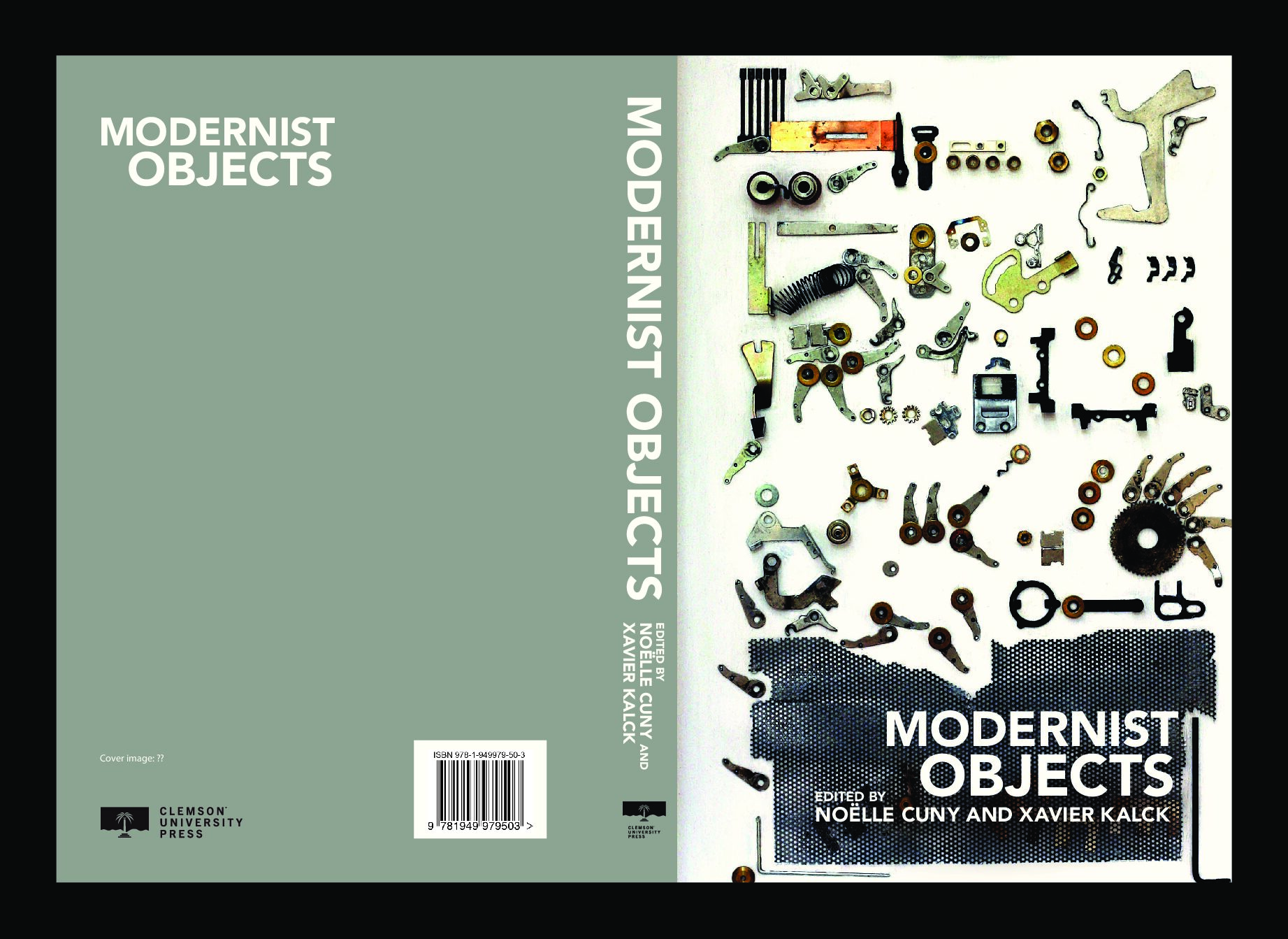 Chères toutes, Chers tous,
Nous avons le plaisir de vous annoncer la parution de l’ouvrage suivant.
Bien cordialement,
L. Cottegnies pour VALE
MODERNIST OBJECTS. Edited by Noëlle Cuny and Xavier Kalck. Clemson University Press: Seminal Modernisms / Liverpool University Press. 256 pages
October 2020 CUP, January 2021 LUP
Hardback: ISBN: 978-1-949979-50-3
eBook: ISBN: 978-1-949979-51-0
https://libraries.clemson.edu/press/books/modernist-objects/
https://www.liverpooluniversitypress.co.uk/books/id/53520/
Abstract
Modernist Objects is a unique mix of cultural studies, literature, and visual arts applied to the discrete materiality of objects. It places objects, how they emerge or withdraw, how they fashion us, and what status they hold, at the heart of what constitutes modernism. Three processes are at work in modernist object experiments: objecting to realism, fashioning the human, and performing the ornamental. The cumbersome bourgeois semiotics of material possessions was itself taken on by writers as diverse as Beckett or Djuna Barnes as a material to be chipped away at, given new life or hollowed out. Writers and creators embraced the object in a way that culminated in such intimate extensions of the mind and body as constructivist clothing, literary magazines, musical instruments, and restorative sculptures. The most skin-deep artifice is shown here to have epoch-changing potentialities. Can a lost brooch define the feminine through an aesthetics of absence? Can the ever-accelerating succession of hats on the head of a lonely alien in Paris, or of manufactured appliances on the dress of a German baroness, loosen the maddening grip of consumer society? Can the bourgeoisie be placed in a position to camp gender (Boscagli) through the use of Japanese lacquer on the outer surfaces of a recliner? This book is characterized by attentiveness to works hitherto considered as minor alongside canonical ones, a careful reclaiming of women’s writing and fine art, and a methodological habit of extending transnational probes outside the realm of the English language.
Endorsements
This rambunctious and riveting collection of essays both widens and polishes the optic through which to perceive the role and the fate of objects within the modernist endeavor. On the one hand, even as it focuses on the uneven struggle against the realist object world, it zeroes in on some of twentieth-century literature’s most curious objects. On the other, the volume extends its purview across media and materials—to the object-clad performances of Baroness Elsa, to Constructivist textiles, to the sensual furniture of Eileen Gray, and the driftwood sculpture of Louise Bourgeois. These delightfully diverse engagements (from both well-established and emergent voices) sustain a steady interrogation—about subject-object relations, about metonymic amplitude, about value within and beyond the market. The authors show how powerfully the question of the object reanimates the question of modernism as such. —Bill Brown, author of Other Things (Chicago, 2015) and co-editor of Critical Inquiry
From surrealist sculptures and readymades, to an abiding obsession with the most ordinary of things, modernism has a long and complex relationship with objects. Do modernist objects enchant or repel? Do they withhold or disclose meaning? Are they hermetic or relational? This dynamic collection explores these and other questions, illuminating both modernist notions of value and the value we as critics and readers assign to modernism. Provocative considerations of Louise Bourgeois’ sculptures sit alongside analyses of Caribbean periodicals, canonical writers like Samuel Beckett, Djuna Barnes, and Virginia Woolf, and less discussed women artists such as Baroness Elsa and Eileen Gray. Transnational, feminist, and multi-media in its overall orientation, Modernist Objects opens up a diverse, capacious idea of modernism that is unusually, and surprisingly, coherent. This volume builds on the last decade of innovations in modernist studies and demonstrates that there is still so much more for us to think about. —Thomas S. Davis, The Ohio State University
Contents:
Modernist Objects
List of Illustrations vii
Introduction 1
Part One: Objecting to Realism
1 Objectionable Objects 21
Douglas Mao
2 “Such density of furniture defeats imagination”: Beckett’s
Post-War Room and the Inheritance of Things 45
Martin Schauss
3 From Eggbeaters and Alcohol to Gryphons, Dolls, and
Puppets: The Affective Mobilities of Djuna Barnes’s Objects 63
Pavlina Radia
4 Tradition and the Test-Tube Baby 79
Rachel Bowlby
Part Two: Fashioning the Human
5 The Fabric of Home: Cotton Cloth between Ontology and
Use-Value in Paul Klee’s and Varvara Stepanova and
Lyubov Popova’s Artwork 97
Sanja Bahun
6 Computer Science for (Live) Modernism(s): Magazines
as Metaobjects 113
Louise Kane
7 “Twang the lyre and rattle the lexicon”: Harps and Lyres in
Modernist Poetry 131
Jennifer Kilgore-Caradec
8 Louise Bourgeois’s Melancholy Objects to be Used 147
Lynn M. Somers
Part Three: Performing the Ornamental
9 Limbswish: Baroness Elsa’s “Ready-to-Wear” Poem-Objects 167
Yasna Bozhkova
10 The Furniture of Alter-Modernism: Eileen Gray’s and
Le Corbusier’s Two Orientalisms 189
Maurizia Boscagli
11 “LOST! HANSOME GOLE BROOCH”: Broken, Lost, and
Forgotten Objects in Woolf, Mansfield, and Stein 209
Nonia Williams
12 Diasporic Modernism: Memory, the Object, and Jean Rhys’s
Good Morning, Midnight (1939) 225
Justine Baillie
Notes 241
Index 279